What are Shirataki Noodles 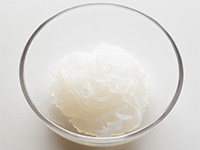 Shirataki noodles, also known as konjac noodles or yam noodles, are Japanese noodles made from konjac flour (yam flour) and used frequently in Japanese cuisine. Shirataki noodles are long, thin, and translucent white (or brown) in colour; an appearance which earned them the name ‘shirataki’, which is Japanese for ‘white waterfall’. Shirataki are normally sold in sealed packets with a brine-like liquid that needs to be drained and washed off before the noodles are used.

Shirataki noodles have been used in Japanese cuisine for centuries. One defining characteristic of shirataki is that it is a filling substance that will absorb the flavours of the foods that surround it, while offering very little flavour of its own. As such, it is most commonly used to bulk up and give contrasting texture to soups, salads, nabe hot pots, and other low carb snacks and meals. More recently, particularly in Western countries, shirataki noodles have started to be used as a replacement for spaghetti, udon, and other types of long and thin noodles, in a wide range of dishes.

Shirataki noodles contain no calories or carbohydrates; a fact which has earned them the alternative names ‘zero noodles’, ‘low calorie noodles’, ‘low carb noodles’, and ‘healthy noodles’. This, combined with their high fibre content, is causing shirataki to rise rapidly in popularity within Western countries, especially among the health conscious.

Click through the other tabs to discover more about how to cook shirataki noodles (including shirataki noodles recipes), and why they are such a useful and beneficial ingredient to incorporate into your cooking. Alternatively, if you are wondering where to buy shirataki noodles, take a look in japancentre.com’s Speciality Noodles section for one of the best collections of shirataki noodles UK-wide.

Shirataki noodles carry a number of health and culinary benefits that the Japanese have loved and utilised for many years. Here are some of the most noteworthy advantages of using shirataki in your cooking.

Shirataki noodles are made from a combination of water and glucomannan; a type of dietary fibre that is frequently utilised within the food industry as an emulsifier or thickener. As neither of these ingredients contain any net calories or carbohydrates, shirataki noodles are as close to zero calorie noodles as it is possible to get. This is particularly ideal for anybody watching their weight, especially if they are on low carbohydrate diets.

The high levels of glucomannan in shirataki noodles makes them a potent source of fibre. Fibre has a number of health benefits, the most prominent of which being its assistance in digestive regularity and its ability to lower levels of cholesterol and other lipids. As well as this, fibre also helps to make a meal more filling and keep you feeling full for longer.

Shirataki noodles are surprisingly sponge-like. Although they have very little, if any, flavour of their own, shirataki noodles have a tendency to absorb the liquids that surround them, including liquid seasonings and sauces. This makes them an excellent vehicle for flavourings.

How to Use Shirataki

If you have never used shirataki noodles before, you might be unsure about what to do with the peculiar, water-tight packs in which shirataki normally comes. Read on below for some popular ways to enjoy shirataki. 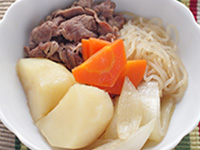 From umami-rich sukiyaki to spicy kimchi nabe, hot pots are the ultimate communal Japanese cooking experience. Mostly consisting of different meats, vegetables, and a lightly seasoned soup broth, shirataki noodles are often also added to provide a slippery, slightly chewy texture without affecting the other flavours. To add shirataki, wash, drain, and set aside the noodles beforehand, then add to the hot pot about 5 minutes before serving. 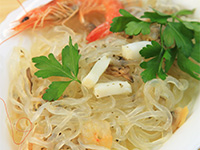 Shirataki noodles are a great ingredient for using as a base in salads. Because shirataki noodles are spectacularly good at absorbing liquids, they can soak up the flavours of dressings and sauces and eliminate the need for liquid seasonings (which will make the salad less soggy in the long run). To prepare shirataki noodles for a salad, wash, drain, and allow the noodles to air dry before adding to a bowl containing the desired salad seasoning. Allow the noodles to marinate overnight before mixing with your other desired salad ingredients. 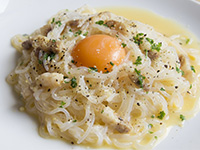 In terms of appearance and texture, shirataki noodles are remarkably similar to spaghetti, soba, and other types of long, thin noodle. Since shirataki is so low in calories, it is becoming more and more commonly used as a healthy alternative to these other noodles in pasta and stir fry dishes. To use shirataki for a pasta or stir fry, wash and drain the shirataki beforehand and set it aside. Prepare the rest of the dish as normal and add the shirataki to the mixture about 5 minutes before it is ready to be served. 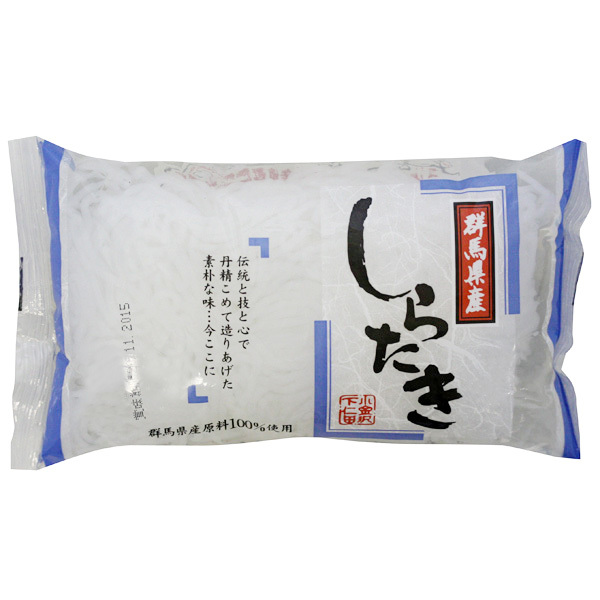