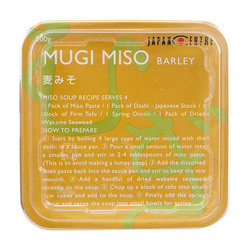 Miso is an essential ingredient in Japanese cuisine, made from soy beans fermented with salt and rice koji mould. Barley miso is different in that it is not made with rice koji, but unblended barley which gives it a dark colour and a rich and salty taste. The process of fermentation can take between one and three years and the longer it takes, the richer the taste and darker the colour. Barley miso is called mugi miso in Japanese and is particularly popular in rural areas and winter due to its hearty nature.

Use this miso as:
• A seasoning for rich soups, stews and sauces.
• In miso soup for a traditional Japanese side dish.
• On vegetables for extra flavour.

Really delicious richness and depth of flavour without being too pungent. It's even nice on its own as a spread on toast.

Rich, deep flavour for soups and other dishes but still sweet enough to spread on toast to enjoy the full flavour. I tend to use this instead of hatcho miso now.

This Barley miso is a touch lighter than the brand I usually use. I think it might become my preferred miso. The less salty taste allows the more subtle flavours to come through.

A miso that can be for many different recipes, quite gentle in flavour.

My first time purchasing this and I really like it.