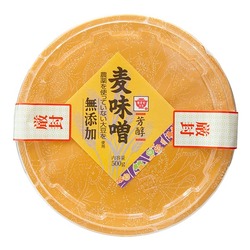 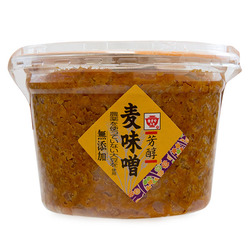 A large tub of barley miso paste made of barley and GM free soy beans for all your Japanese cooking needs.

Miso is an essential ingredient in Japanese cuisine, made from soy beans fermented with salt and rice koji mould. Barley miso is different in that it is made not with rice koji, but unblended barley which gives it a dark colour and a rich and salty taste. The process of fermentation can take between one and three years and the longer it takes, the richer the taste and darker the colour. Barley miso is called mugi miso in Japanese and is particularly popular in rural areas and winter due to its hearty nature.

Barley miso is usually used to season rich soups, stews and sauces. Every Japanese food lover should have some in their fridge! 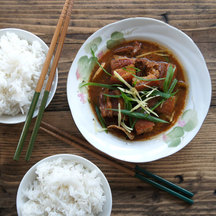 To cook with my pasta \nYes\nQuality very good

I use the Miso as erecommended and add to it the softened seaweed .\nI already recommended itto my friends.\nQuality is excellent

I would recommend to family and friends, \n***

This product is delicious and very nutritious .\nI would recommend it .

I use miso diluted and add hot seaweed in boiling water after water has cooled \n, as recommended by health specialist