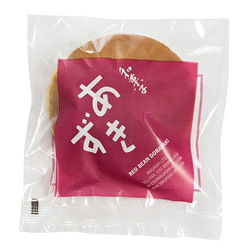 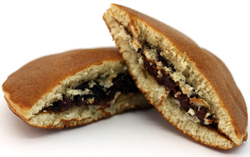 Enjoy one of Japan's oldest and most beloved desserts made to maximum authenticity with this azuki dorayaki. Made from two round pancakes filled with sweet azuki red bean paste, the sweet, spongy cakes perfectly complement the stickier, slightly heavier texture of the smooth red bean paste inside.

Dorayaki are one of Japanese cuisine's original desserts. It is said that their invention dates back to feudal Japan, when a Samurai warrior left his gong ('dora) at a farmer’s home where he was hiding. The farmer used the gong to cook ('yaki') round pancakes. For more exciting dorayaki flavours and other traditional Japanese desserts, take a look at japancentre.com's Desserts section.

Lacking red beans. \nI'm sure in the past the cake was full of filings. These were only at 30%