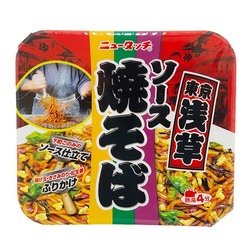 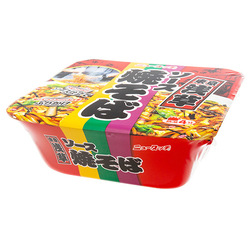 The flavour of Asakusa in just three minutes.

Whether you are nostalgic for the traditional feel of the iconic town in Tokyo, or you are on the lookout for a great-tasting instant noodle bowl, New Touch's Asakusa brown sauce yakisoba is guaranteed to fit the bill. This yakisoba comes with masses of instant fried yakisoba noodles, a separate sachet of rich, savoury, brown yakisoba sauce (identical in flavour to the sauces used in yakisoba restaurants in Asakusa), and sachets of different vegetables and garnishes, including cabbage strips, tempura pearls flavoured with squid, nori seaweed flakes, and pickled ginger. Enjoy as part of a quick lunch or dinner.

Yakisoba (which literally means 'fried noodles'), is a favourite dish during Japanese summertime festivals, due to both its deliciously moreish savoury flavour and the ease with which mountains of it can be prepared on large hot plates and barbecues. Instant yakisoba bowls such as this mean that this irresistable noodle dish can be enjoyed anywhere where there is an operating kettle and running water nearby. For a fantastic range of yakisoba items, take a look at Japan Centre's Yakisoba section.